At Extreme, we are an inquisitive bunch — we like to hypothesise and test things for ourselves, rather than blindly following the teachings of other SEOs. This blog is testament to that. What you are seeing here is not just an SEO blog, but a live ‘link building’ case study.

For you, see, this article is also an experiment to test the effects of link relevancy on a webpage’s organic visibility. In this case, there is a link from the Telegraph which inexplicably points to a page on our website that returns a 404 page error. While the Telegraph is of course a very reputable outlet and source, the content itself had nothing to do with the company, our services as a company or our staff.

The article itself was about actor George Clooney’s relationship with model Lisa Snowdon — a topic we can all agree holds little relevance to Extreme. But, as we established earlier in the article, relevancy plays a big role in determining the quality of a link, but we were curious, given the source, if there were exceptions to this rule.

We’ll begin by publishing this article as normal with the typical degree of optimisation, but crucially without the link being pointed towards it. Once it has been indexed for some time by Google and rankings have plateaued for our targeted keywords, we will then 301 redirect the Telegraph link away from the 404 page towards this one, and then we will record and measure the effect the link has.

Backlinks go by a range of names including “inbound links”, “incoming links” or “one way links” and of course, “links” — but they all mean the same! Pure and simply, a backlink is a link from one website to another.

Backlinks are primarily used as a means to link users on your site to resources or information which they may find helpful, but on occasion this system has been abused by webmasters in decept and circumvent search engines to promote their organic rankings.

What implications do backlinks have for SEO?

As previously alluded, backlinks are signs of approval bestowed from one website to another because, in some way, the content is deemed to be useful or insightful to the user.

Should you get enough of these links from reputable and relevant sites, search engines can begin to positively interpret these signals to mean your website is a respected thought leader or specialist in your sector or industry. As an important ranking factor, link profiles have to be taken seriously as they have the potential to elevate your website visibility.

On the flip side, and as previously alluded to in the previous section, some webmasters have taken the controversial step of turning their hand to “black hat SEO” as a means to unfairly increase organic visibility. Black hat SEO emcompasses practices which are not designed to serve the user or the user experience, but are instead ways in which to exploit any perceived algorithm ‘loopholes’ in an effort to gain further organic visibility.

Thankfully, such acts of deception in 2020 can lead to the opposite and, in the worst cases, can result in manual penalties as Google and other search engines attempt to close those gaps in their algorithms. In the past, black hat SEO tactics have included the use of link farms in an attempt to bolster their backlink profiles or through buying links.

Now to add a layer of complexity, backlinks can be categorised in numerous different ways, but ‘follow’ or ‘nofollow’ are perhaps the most common. All that identifies a link as either of these is a small bit of unassuming code which is invisible to the user. Despite only being a small line of code, these tags should not be underestimated and are not to be applied thoughtlessly.

A ‘rel=nofollow’ link can effectively neuter the authority which is passed from one site to another, and conversely a ‘rel=follow’ link allows for the total passage of authority. An example of a nofollow tag can be seen below.

A follow tag conveys the message to search engines as a ‘vote’ in favour of that content and as a consequence link authority can pass freely from one site to another. Whereas, a nofollow tag prevents the passage of authority but still enables users to navigate to the page.

This practice was created as a means to curtail unscrupulous link building activities including people linking back to their own site via the comments section of a more authoritative site. But it has been more recently employed by influencers to dissociate themselves from any paid activities they have done for a client.

If you are still unsure whether a follow or nofollow tag is the most appropriate, it could be better to make the decision based on sentiment. If you are choosing to link to a site because it provides a valuable service to your user or as supporting evidence to a point that you have raised that in most cases a follow link would be acceptable.

However, if you invite people to leave comments on a blog on your website, you may want to nofollow any links which may link out from their comment. In the past, people have abused blog comment sections as a means to link to their own site or other reputable sites you would not wish to be associated with.

The above has been the norm in the SEO community for nearly 15 years now, but in September 2019 this was opened up as Google announced the following new attributes, rel=”sponsored” and rel=”ugu”. In Googles’ own words, rel=”sponsored” attribute should be applied “to identify links on your site that were created as part of advertisements, sponsorships or other compensation agreements”. While rel=“ugu” is recommended for user generated content, such as blog comments or similar.

This is not to say that we should be rushing to our computers to strike nofollows from our websites code. In the majority of cases, nofollow is still correct and is supported by Google, except for for instances where links were paid or sponsored where you will want to change your tag to rel=sponsored.

What is Anchor Text?

The final component to any backlink is link text. Link text is intended to help inform the user as to what they expect to discover if they were to follow the link to the page. An example of anchor text can be seen below:

Not only is link text useful for users to decipher what the sentiment of the link, it is also extremely useful for search engines for the same reason.

Not all links are created equal

Now, you are probably wondering how do you know what a beneficial link looks like? Obviously, links from websites which are factually inaccurate or excessively promote dubious adverts aren’t going to do you any favours. Websites like these are known in the industry as being ‘spammy’ and many SEO tools offer services which attempt to measure and categorise links with spam or quality scores.

One of the greatest qualities a backlink can have is relevancy; and this differs according to each individual website. For example, if you had a website selling floor tiles, a backlink from a film review site is most likely to be irrelevant and unlikely to guide serious customers to your site. Whereas, if you ran an independent cinema, a backlink from a film review site which perhaps references you as a credible local cinema to go watch a new release, is entirely appropriate.

Where links are concerned, there are archaic views still making the rounds amongst some SEOs. Whilst ‘Domain Authority’ and ‘Page Authority’ are useful in determining how robust a given site's backlink profile is, some have prioritised this metric above all else. If you suspect that your websites’ backlink profile is not up to scratch and isn’t facilitating your organic growth, this is where digital marketing agencies like ours can help…

So, how can Extreme help with my backlinks?

First of all, we don’t ‘link build’ or treat link acquisition as a singular campaign; this tends to distract from the original purpose as it can slowly evolve into a box-ticking exercise. We prefer to take a holistic approach which includes the whole marketing mix. Strong marketing campaigns which aim to serve useful or insightful content to users can give rise to links on their own.

In addition to acquiring new links, it is also important to maintain and closely monitor your existing ones. We look to ensure that your backlink profile is as healthy as possible, and devoid of spammy links or other untoward links which can jeopardise your site or incur manual link penalties.

Come back again to see how we get on as we will periodically update this blog to describe the impact, if any, this ‘link building’ approach has had.

Good read? Why not spread the word!

The Importance of Relevance & Authority: A ‘Link Building’ Case Study

Want our talented SEO team get to work on your organic search presence?

Show me the links

Harry looks after the day to day SEO management for a range of our clients. Following a stint working at some large agencies down south, Harry recently returned to the North which he calls home. 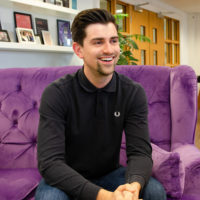 How To Rank With Featured Snippets Without Creating New Content

How should my brand speak during a crisis?

Our work has been shortlisted!